Scotland is filled with empty spaces, and Sutherland is the largest of them all. With a population density of less than 3 per square kilometer (contrast that with Surrey at 683) you're unlikely to find yourself standing in a queue! Sure, you'll meet other drivers on the narrow, single track roads but driving here is such a pleasure you'll hardly notice them when you do.

We have sat at the summit of every major feature within an hours drive, Ben Loyal 8 times, and rarely have we seen another party, either en-route or at the top! Enjoy unrestricted access to the beautiful sandy beaches scattered along our coastline and, for the most part, even those not far from the roadside you'll have to yourself.
Anyone who enjoys taking photographs will overdose on subject matter and no doubt be the most frustrating of passengers. For those prepared to make the effort to reach us, you will not be disappointed because this is a county you can enjoy almost as if it were your own.

No matter what you prefer to call it, getting out and about on foot is the very best way to enjoy everything the Highlands have to offer. We have some of the finest mountains and hill walks in Scotland right on our doorstep. Travel times are measured in ooohs and aahhs, not hours and minutes, so even the journey to those places a little further afield, like Foinaven or Sandwood Bay, is a pleasant experience in itself! 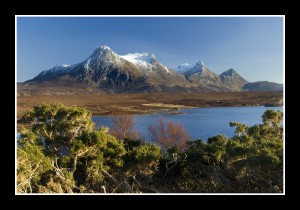 Ben Klibreck, Ben Loyal, The Queen of Scottish Mountains, and Ben Hope, Scotland's most northerly munro, are only a short drive away!

For more detailed information about walking routes in and around our area, from easy to strenuous, we highly recommend you visit Sutherland Walks

If you prefer a different kind of leg power then you'll find the quiet open roads a real pleasure to cycle along. With miles of single track roads to enjoy you'll be spoiled for choice when it comes to selecting your route for the day.  We can recommend Strathtongue-Altnaharra-Hope-Strathtongue as a particularly rewarding day out. The Poor House sits on the Aberdeen to Shetland Islands section of National Cycle Network Route 1, so we are ideally placed for rest and repair!

If golf is your passion we guarantee you won't enjoy a more spectacular drive (pun intended) than the one that takes you around the glittering waters of Loch Eriboll, on to Durness and the most north-westerly course on the UK mainland.

The course is open to visitors all year round seven days a week from dawn till dusk. Officially recognised as a nine hole course, but with a second set of very different tees Durness plays like a traditional 18 holes. Being situated in North West Sutherland golfers are ensured spectacular scenery and a closeness to nature. If you have a bad day on the course, don't worry, by the time you get home you'll have forgotten all about it, probably! Watch this short video for an excellent introduction to the course. Thanks to The Scottish Golf Podcast.